Are You Working Hard Enough? If Not, Work Harder!

Hi, I’m Adele Spraggon, and this is the Fulfillment Blog: The blog for those who are looking for ways to find success, happiness, and peace of mind in today’s topsy-turvy, mixed up world.

The question we are answering is this: Are your working hard enough? Is there a more effective way to develop your mind so that you can permanently achieve your goals, free of procrastination, and enjoy the happiness and peace of mind you deserve.

Today, we are going to question one of the mainstays of traditional approaches to mindset. The myth that to achieve your goals, requires a strong commitment to those goals. 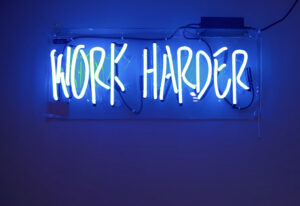 Are You Working Hard Enough in Your Opinion?

To begin, let’s set the stage.

Imagine that you are a team member, and the team is counting on you to complete your piece of a client proposal. It is due tomorrow, and you’ve been procrastinating all week. Every time you sat down to look at the proposal, you felt overwhelmed, confused and exhausted. So you kept putting it off, thinking that the next day would be better. Now here it is, last minute, and despite your commitment to the end goal, you can’t seem to pull your thoughts together.

So what’s going on here? Are you to blame? Are you choosing to let your team down? After all, we live in a world that is quick to blame and shame when people don’t follow through on their commitments.

To explore our answer to this question, let’s listen in on a sermon given by the evangelical preacher Bishop Jakes on the topic of commitment.

At this point in the sermon, Bishop Jakes has already been preaching for a while. What had started as a crisp, white linen suit is now hanging limp with sweat, and he is bellowing at his congregation.

“It’s about commitment! You can have all the education you want, but if you don’t commit, you will not succeed!”

More than a few heads are nodding in agreement.

“Your life is a false advertisement! Your whole life is a façade—a fake—built on commitments you have never been willing to pay.”

More heads are now bobbing, and some of the audience are now on their feet, cheering and applauding.

“Commitments have nothing to do with your feelings! Stop expecting to be rewarded for what you are supposed to do.”

The majority are now on their feet and loud cheers and laughter ring through the audience. A woman looks at her husband with an “I told you so look” written all over her face.

My Experience With Personal Development Program

I used to believe that too. In fact, I even participated for years in a popular personal development program that preached that one’s success depended almost entirely on your commitment. This program, which shall remain nameless, maintained integrity as its foundation. The idea was that once someone had given their word, their commitment to that word overrode everything else, including their feelings.

To complete one aspect of this program, I had to pass certain measures. One measure was to enrol someone who had previously attended an introduction into the program. The measurement for success was ten percent, which meant that for every ten phone calls, I needed one enrollment.

Over three months, I made over sixty telephone calls without a single enrollment. Sixty conversations – zero registrations! As the program completion date neared, I voluntarily went to the program centre every single day in efforts to maintain my commitment.

Eventually, I had no choice but to admit defeat because in order for me to pass, I would need to register nine people in a row. Considering that my ratio so far was zero to eighty, it seemed less than likely.

Does your level of commitment have any actual impact on your success?

To answer that question, we need to take a peek under the hood – in this case, the hood is the skull that your brain sits within. And let’s ask a different question. What was going on in that brain that had me going to the centre every day despite my losing track record?

Peeking underneath your skull, you see that your brain looks much like a complex circuit board – neural pathways are crisscrossing everywhere, and electrical impulses are flying down these channels at lightning speed.

As you experience these electrical impulses shooting down these different channels, you are lead to an intriguing observation. Each electric stimulation is triggering a particular belief, behaviour or action. When an electrical impulse runs down a different channel, you experience a different belief, behaviour or action. In your position as an observer of your mind, you are made aware of something you never thought about before. That electrical impulse is coming first. What you feel, think, and do is resulting from a pre-established channel in your brain, the use of which is preselected by the unconscious. Surprised, you realize that you are not responsible for the channel your brain is selecting.

And if you’re not choosing which track the brain sends an electrical impulse down, then how can you decide your behaviour. This has you wonder: Which channel was in use when you were procrastinating on that proposal?

Looking around your brain, you find it. There it is!

You didn’t choose to procrastinate on your proposal. Your brain decided on your behalf.

As you exit your brain, you do so with this conclusion. If you are going to stop procrastinating, you need to begin where the action of procrastination originates, which is not out here in the situation, but inside your brain’s current wiring.

We’ll come back to this idea later. For now, let’s return to Bishop Jakes’ sermon and, based on what we just learned about our own brain and how it is wired to predetermine our actions, let’s see if we can identify the brain pattern that is supporting Bishop Jakes in remaining committed to his goals.

He is nearing the end of his sermon. Let’s take a listen.

“When I started my church, I didn’t have anything! We worked when we didn’t have food; we worked when we didn’t have lights. I only had one suit. I had to wash my suit in the washing machine. They laughed at me! They said I looked like a country preacher! I had holes in my shoes. They laughed at me. I was embarrassed to kneel down in my own church because I didn’t want anyone to see those holes. I don’t care what you think – if I believe it, I will be it! Somebody yell commitment. … You’ll never bring down someone who is committed because somebody who is committed has been down before they ever got up”.

Now personally, I have no doubt that there were times in the early days of starting his church that Bishop Jakes wanted to give up. But then he would hear someone tittering behind his back, and a neural pathway in his brain would respond to this stimuli. The result: He would bristle, remembering those who called him a “country preacher.”

At the end of a long day, he would remove his shoes and look down at those holes; he would take off his only suit and place it into the washing machine. And those actions would trigger a pattern: a brain pattern that, in his case, was strengthening—not weakening—his resolve.

It was that pattern, not a commitment, that had him stand a little taller, plant his rebellious feet firmly in the ground and say to himself, “You’ll never bring me down?”

Bishop Jakes was committed, yes, but it was his pattern that made for his level of commitment, not the other way around.

So here’s the first step in our new understanding. Every issue that you face in your life, good, bad, indifferent, starts with a brain pattern. The answer does not lie in fighting your brain patterns; it lies in getting the right pattern for the situation into your brain.

Next week, we’ll dive deeper into this concept.